Q&A With Lori Bitter on the 'Grandparent Economy'

Baby boomers are changing the definition of aging in America. Lori Bitter, a consultant who specializes in engaging with mature consumers at The Business of Aging, delves into the changes in American households and their broader social effect in her new book, “The Grandparent Economy.” She answered some questions for SeniorHousingNet.com on grandparenting, the golden years and deciding where to live.

Q: What is the ‘grandparent economy’?

A: The “grandparent economy” refers to the new expenditure of time and money that arose from the downturn of the economy coupled with the aging of the baby boomers into the grandparent life stage. This new generation of grandparents stepped in to help their adult children and grandchildren in ways that redefined grandparenting. They changed spending patterns, became revolving-purchase influencers and sparked a return to old-fashioned multigeneration households.

Q: When you talk about the new grandparents, what age group are you talking about?

A: The average age of first-time grandparents is 48 and creeping up each year. In general, this number is older on the coasts and tends to be younger in the middle of the country. The median age is 50 for grandmothers and 54 for grandfathers, so the majority of these grandparents are in the baby-boom generation, which is 51 to 69 this year. By 2020 there will be 80 million grandparents, or one in every three adults will be a grandparent.

Q: How has grandparenting changed in the last 20 years?

A: Baby boomers were just “aging into” the grandparent life stage. The grandparents 20 years ago were from the WWII and Silent Generations–characterized by traditional, conservative values and a “retire at 65” mentality that turned many into snowbirds. This generation viewed their grandparenting role just as traditionally. They didn’t meddle. They visited when invited, sent cards and gifts for the holidays, and shared their values of hard work, thrift and delayed gratification. Their idea of legacy was leaving an inheritance of cash and real estate.

Baby boomers rebelled against the status quo and the values of the previous generations. They indulged their children, blurring the lines between friend and parent. They coined the term “helicopter parent” by hovering over their children at every life stage. They used credit to buy now and pay later, and to satisfy their need for immediate gratification for themselves and their children.

As grandparents, they continue to hover and blur the line between parenting and grandparenting. They create places in their homes for their grandchildren: rooms, play areas and cooking stations. And they spend on everything from day-to-day expenses, private schools and cars to college savings plans. The boomer idea of legacy is creating memories and providing experiences now, while they can enjoy it with their families.

Q: How is the baby-boom generation approaching retirement differently? How do they want to spend their golden years?

A: The world of work radically changed for this generation. Few had careers with one employer with a gold watch and fixed pension at the end. Most are working past age 65 as longevity has increased, retirement plans are underfunded, and they are helping to support their adult children and grandchildren. Most boomers have patched together a long career with multiple employers and plan to work into their 70s. Many are becoming entrepreneurs and consulting back to their former companies, forming small companies or exploring franchises. They prioritize their time with their family even though they are still working. Most say the “golden years” of retirement will be in their 80s, when they stop regular work, and that they expect to live in their own home until they die.

Q: How are today’s seniors looking at their living options as they age and their needs change?

A: In general, every generation of seniors would prefer to stay in their current living situation until the end of their life. Older seniors (Silent Generation/WWII) are more likely to choose traditional retirement communities that are age-restricted and provide resort-style amenities with little or no home maintenance. There is a broad range of these types of products in the real estate market that range from a freestanding home in a restricted community to continuing care options that provide necessary health care.

Baby boomers say they will not move to these type of retirement concepts and prefer living in multigenerational communities. Contrary to headlines, many boomers are not downsizing (yet) as the needs of their families take priority. They will likely wait until their grandchildren are older and “launched” before they do so. A small percentage is attracted to planned communities that have rich amenities for a range of ages–pools, tennis and parks–but designated neighborhoods for older adults.

There are 7.2 million intergenerational households in the U.S., including 2.7 million with a grandparent living in. Of those, 4.5 million are grandparent-led households where grandparents are raising or helping to raise grandchildren. More than one-third of those have no parents present and are the sole support for their grandchildren.

Regardless of living style, boomer grandparents report higher levels of engagement and financial support than past generations of grandparents. This desire to be actively involved in their grandchildren’s daily lives reflects one more–perhaps their last–rebellion against the status quo. 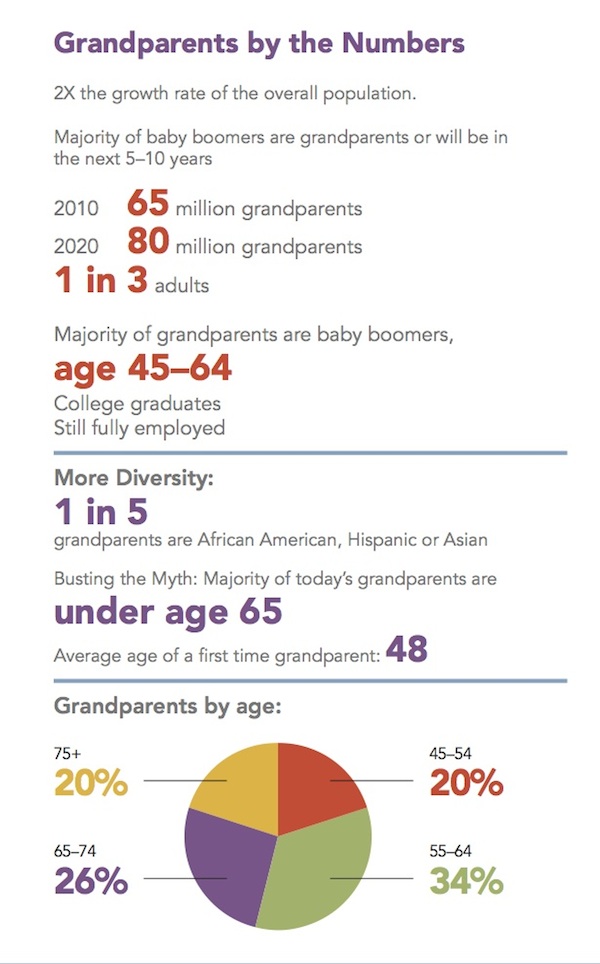 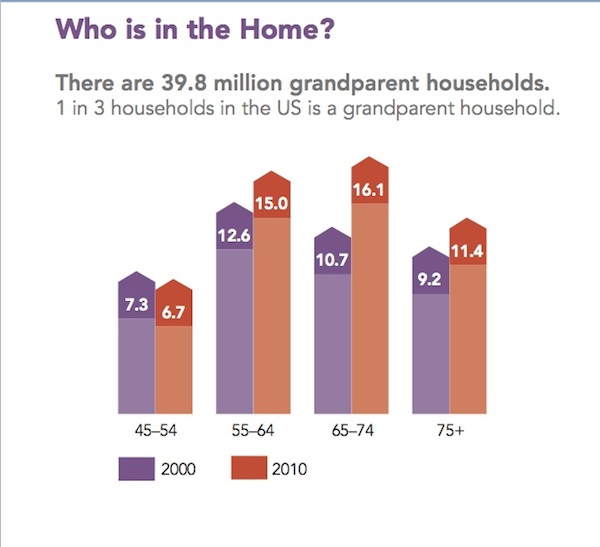