A Top-Rated Nursing Home Is Hard to Find in Texas, 10 Other States

During the night, fire ants had swarmed over her 85-year-old mother, injecting their stinging venom into Natalie Sealy’s face, arms, hands and chest.

“She was just lying there being eaten alive,” said daughter Billie Pender, who said she and her sister had repeatedly complained about a broken windowsill in their mother’s room at Parkview Nursing and Rehabilitation Center. The Sept. 2 attack devastated Sealy, a retired bank teller with dementia. “She went steadily downhill,” dying in late March, said Sherwood, who brought a lawsuit against the home.

Their mother had chosen the for-profit facility two years earlier because it was near her adult children. The family didn’t know that Parkview scored poorly on staffing and other quality measures. This year, Medicare rates it one star out of a possible five stars–the lowest rating possible–on Nursing Home Compare, which was designed by the federal government to help consumers choose a long-term care facility.

The problem for Sealy’s family and residents of many parts of the country is they have few, if any, higher-rated options if they want their loved ones close by. In 11 states, 40 percent or more of nursing homes get the two lowest ratings, according to an analysis by the Kaiser Family Foundation. (Kaiser Health News is an editorially independent program of the foundation.)

Texas has the highest percentage of one- and two-star homes in the country: 51 percent of its nursing homes are rated “below average,” or “much below average,” on Nursing Home Compare, according to the analysis. Louisiana is close behind at 49 percent, with Oklahoma, Georgia and West Virginia tying for third at 46 percent.

Other states with at least 40 percent of homes ranked at the bottom two rungs include North Carolina, Tennessee, Kentucky, Ohio, Pennsylvania and New York.

Stars are awarded based on government inspection reports, staffing levels and self-reported quality measures, including the percentage of residents who develop bed sores or who are injured in falls. Earlier this year, the government added quality criteria and as a result, many nursing homes dropped a star or more.

Nursing Home Compare is not the only guide to long-term care facilities. In fact, Medicare urges consumers not to rely solely on the website, but to gather information from a variety of sources, including visits to the facility. That’s because the star ratings, which launched in 2008, cannot consider all the factors important to a particular family, such as the availability of specialty care or the home’s distance from family members–a key issue because frequent visits correlate with better outcomes.

Nonetheless, consumer groups say the stars offer a good starting point. “I’d stay away from anything that had one or two stars,” said Brian Lee, executive director of Families for Better Care, a Florida-based advocacy group for nursing home residents.

Sealy’s family didn’t have that option, however, if she was going to stay by her daughters in Lockhart, a small town about 30 miles south of Austin.

Nine of the 10 nursing homes within a 25-mile radius get only one or two stars. Only one home–about 20 miles away in San Marcos–garners three stars. Not a single home in that radius earns four or five stars–the highest Medicare rating, although nearly half of nursing homes nationally get those scores.

Moving farther away would have made it “impossible to go visit her every day,” Sherwood said.

‘Why are we allowing these providers to continue?’

Despite decades of scrutiny, the large percentage of low-ranked homes in Texas and across a broad swath of the country from the Deep South, through the Ohio Valley and into the Northeast shows that quality in the nation’s nearly 15,500 nursing homes remains highly variable.

“Conditions are not changing rapidly enough,” said Robyn Grant, director of public policy at the National Consumer Voice for Quality Long-Term Care. “We hear frequently about poor nursing homes and usually they’ve been poor for a long, long time. Why are we allowing these providers to continue?” 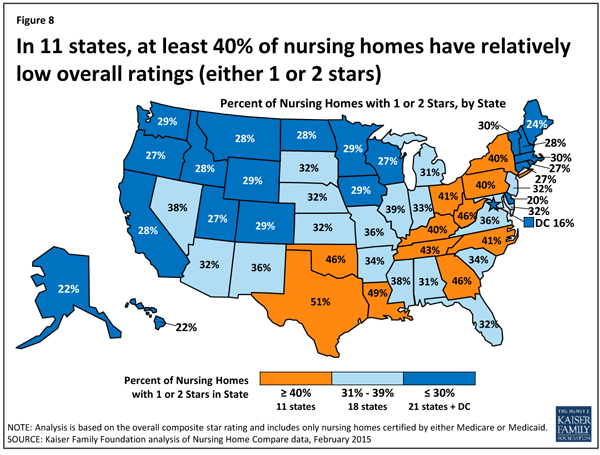 Ideally, she said, homes should provide about four hours of direct care to each resident every day, with some of that delivered by registered nurses. But no state requires that.

Federal law requires that a registered nurse be on duty at least eight hours a day, and that a licensed vocational nurse always be on hand. About 26 states have additional standards, which are generally a ratio of residents to staff, or hours of care per day. Texas does not set specific staffing ratios for nurses’ aides and other non-licensed staff, except in specialized Alzheimer’s units.

For-profit nursing homes also tend to get lower quality scores than nonprofits, according to several studies. In Texas, 86 percent of homes are for-profit, compared with 70 percent nationally, according to the Kaiser Foundation report. States with more low-income seniors also tend to score lower.

In their view, the chief problem is insufficient Medicaid payments, which make it harder to hire and keep staff.

“We’ve been chronically underfunded for 20 years,” said George Linial, president and CEO of LeadingAge, an advocacy group whose members include nonprofit nursing homes in Texas.

While it varies by home, Linial and others said about 70 percent of Texas nursing home residents are on Medicaid.

“How can a nursing home that’s getting paid $135 a day per resident afford to pay someone a decent wage?” he asked.

Medicaid payments by the state of Texas for nursing home care are among the lowest in the country, averaging $133 a day per resident in 2014, according to a report prepared for the American Health Care Association, a federation of nursing homes, assisted living centers and other long-term care providers.

Based on 2014 cost estimates, homes in Texas faced an average shortfall of $13.81 a day per Medicaid resident, the report says. All 34 states and the District of Columbia listed in the report–except North Dakota–had shortfalls, according to the estimates, with New York’s the largest, at $40.54 a day. Those larger shortfalls do not necessarily correlate with states with the highest percentage of low-ranked homes.

Patient advocates are skeptical of arguments about inadequate financing, saying staffing can be good in some homes and poor in others when they operate in the same state and receive similar Medicaid payments.

“Many of these nursing homes are making profits, but they put profits over staffing,” said Harrington of the University of California.

The debate over profits is complicated because it’s difficult to track profits and revenue, since many nursing homes are owned by private corporations or limited partnerships with complex ownership structures.

“There’s plenty of profit being made by these facilities, but they’re shoveling it out through management contracts to themselves,” said Charles Brown, a partner in the law firm Brown, Wharton & Brothers, which is representing Sealy’s family in their lawsuit against Parkview.

Parkview has ‘a lot of good people’

A casual visitor to Parkview Nursing and Rehabilitation Center might have no clue about its low ratings on Nursing Home Compare. It’s a pleasant-looking facility, with colorful paper decorations made by local schoolchildren adorning its lobby and awards proclaiming it the winner of the local newspaper’s survey for “Best Nursing Home in Caldwell County.”

Administrator Lane Allen is clearly proud of the facility and his staff: “There are a lot of good people [working] in a very tough environment.”

Nursing Home Compare gives Parkview one star for staffing, saying it provides about one hour and ten minutes of licensed nursing care per resident a day, compared with a Texas average of about one-and-a-half hours. It provides one hour and 56 minutes of care per day by certified aides, compared with a Texas average of two hours and 18 minutes. The national average is nearly two and a half hours.

Allen said that one of his biggest problems is getting and keeping workers, noting that a local Dairy Queen pays $10 an hour, the same rate an entry level aide would make. He employs about 80 staffers, about three quarters of whom are nurse’s aides.

Like many nursing homes, Parkview gets mixed inspection reports: In 2011, state regulators said it provided a “substandard quality of care.” In 2012, it was “in substantial compliance” with regulations. In 2013, problems causing “actual harm or immediate jeopardy” for residents were noted.

Following a complaint by Sealy’s daughters, the state inspected Parkview in September, finding “rules or laws were violated,” according to an Oct. 15 letter to the family. The state “intends to issue citations and may impose other sanctions,” the letter said.

But state spokeswoman Cecilia Cavuto said no citations were issued because the enforcement division determined there was not enough evidence should the facility dispute them. Also, she said, the broken windowsill had been fixed. The October letter to the sisters should have reflected that no citations would be issued, she said. Under Texas law, homes can avoid fines if they state how they plan to fix the problem.

Asked about the ant attack, Allen said, “there are two sides to every story,” but declined to elaborate. He referred questions to corporate officials, who declined to comment citing the pending lawsuit.

Since 2010, the home has been owned by Pinnacle Health Facilities XIX, with Plano businessman Thomas D. Scott as the majority owner, according to state records. Spokeswoman Rebecca Reid said Parkview is a leased facility operated by and managed by Preferred Care Partners Management Group, which operates in several states.

Lawmakers in several states, including Washington and Connecticut, are debating proposals to raise staffing standards to boost care. Washington’s would require almost three and a half hours of direct care staffing per resident starting in July and large urban nursing homes would need an RN on duty 24 hours a day. Connecticut’s proposal calls for 2.3 hours of staff time per resident each day, up from 1.9 hours.

In Texas, lawmakers are deliberating on a bill that would allow the state to yank the license of any home that gets three citations for problems causing “immediate jeopardy” to residents–the most serious category–within a two-year period. The so-called “three-strikes” measure has passed the Senate and has been referred to the House Committee on Human Services. Another bill would close a loophole that allows homes to avoid paying fines on certain serious violations if they “fix” the problems.

“We’re at a point where we say enough is enough,” said Republican state Sen. Charles Schwertner, during a February hearing on the three-strikes bill, which he sponsored.

The bill was prompted in part by a state commission report last summer that sharply criticized the Texas agency charged with overseeing nursing homes. In fiscal 2013, state regulators took enforcement action against less than one percent of almost 38,000 violations, the commission found. Regulators collected only $400,000 in fines against nursing homes that made an estimated $5.4 billion that year.

The industry argues that three-strikes laws are unfair because government inspectors vary in what they consider “immediate jeopardy.” It succeeded in getting lawmakers to modify the proposal so that affected homes would have the opportunity to seek a waiver if they can prove problems won’t harm residents.

“This says … nursing homes that have a license from the state must live up to that license,” says Amanda Fredriksen, AARP’s associate director for state policy in Texas.

The three-strikes bill would not have affected Parkview. Sealy’s daughters are hoping the legal system will keep someone else’s mother from suffering as their mother did.

“Things happen, I understand,” says Sherwood. “But when they happen from being negligent, or not doing proper maintenance, [people] should be held accountable.”

Kaiser Health News (KHN) is a nonprofit national health policy news service. KHN’s coverage of aging and long-term care issues is supported in part by a grant from The SCAN Foundation.